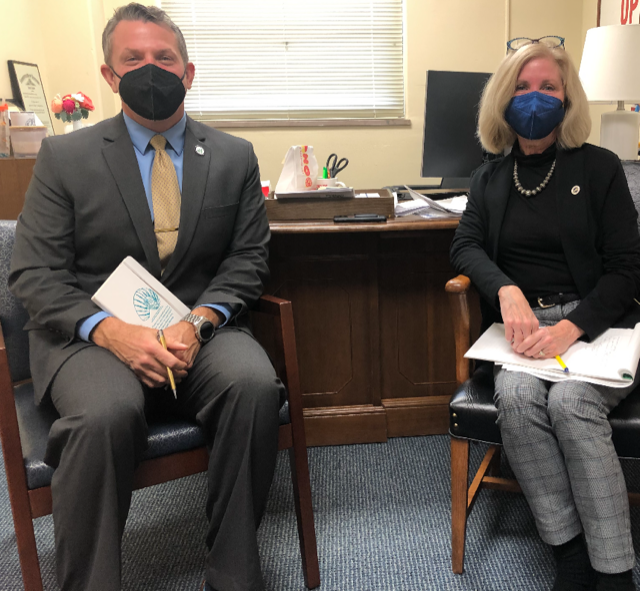 My update this week is different than usual, focusing less on specific activities of the past week, and instead providing a broader overview of bills filed this session.

On Thursday of this week, the Kentucky House of Representatives commemorated International Holocaust Day of Remembrance with a bipartisan, unanimously-supported House Resolution.  As stated in the Resolution, the occasion “offers an opportunity to reflect on the moral responsibility of individuals, societies, and governments.”

In her remarks on the House floor, my friend and colleague Representative Nima Kulkarni described the gradual bureaucratic establishment of laws and policies that ultimately led to the death of 6 million Jewish people, and the persecution and death of millions more human beings based on their ethnicity, religion, sexual orientation and expression, political beliefs, physical and intellectual disabilities, mental illness, and economic status.  Rep. Kulkarni reminded us that the Holocaust was “an atrocity that did not happen overnight,  but over the course of . . . years.“

She went on: “The ties that bind us together as human beings are easily broken.  But they are rarely broken collectively or all at once.  They are broken person by person, little by little, day by day…. As soon as we allow ourselves to think of [one another] as…OTHER than us, atrocities become possible.”

These are powerful words, and I’ve been reflecting on them ever since.  I’ve been thinking of long-standing policies and practices in our country and in our state that inflict harm; that explicitly or implicitly contribute to the disenfranchisement, marginalization, or “othering” of our fellow humans; and that sustain a caste system that is rarely acknowledged or discussed.

Currently, there are proposals pending before the legislature that would marginalize and inflict harm on some among us, and others that have the potential to mitigate past and current harms.

2022 Bills that Marginalize and Exclude

Commonly referred to as the “anti-CRT” bills, HB18 would censor classroom teachers from discussions of history, literature, the arts, etc., that address race, and HB14 would punish schools for allowing teachers to discuss race.

HB63 would mandate armed police officers with full powers of arrest inside every Kentucky public school.

HB231 would prohibit local governments and school districts from adopting “sanctuary” policies meant to provide comfort and safety to our immigrant neighbors without regard to their immigration status.

SB44 would criminalize insulting a police officer at a protest, and is laden with troubling implications.

HB324 would add new and onerous barriers to already-burdensome restrictions on full reproductive healthcare for pregnant young people, that will have a disproportionate impact on poor kids, and minors who are the victims of incest and sexual assault.

HB23, HB247, and SB83 are anti-trans bills that would ban participation on girls’ school sports teams for some transgender students, contributing to shame and marginalization of some of Kentucky’s most vulnerable young people.

HB253 and SB84 would prevent trans youth from receiving gender-affirming healthcare, and ban  healthcare professionals from providing gender-affirming care. This is in sharp contrast to current and evidence-based clinical recommendations, and could have dire consequences for some young people.

HB305 and SB50 would re-direct public dollars to pay for private school tuition, even though private schools are not held to the same nondiscrimination standards as our public schools.

2022 Bills to Mitigate Past and Current Harms

HB67 would require a teaching of the history of racism, and HB88 would add a requirement to include the history of African American and indigenous people in public school curricula.

HB11 would extend civil rights protections in the areas of employment, housing, and public accommodations to ALL Kentuckians, without regard to sexual orientation, gender identity, or gender expression.

HB12 would prevent licensed health providers from engaging in the dangerous and too-often deadly practice of so-called “conversion therapy.”

HB293 would “ban the box” from employment applications.

HB47 would abolish the death penalty.

HB201 would require wealthy corporations to pay their fair share in taxes, and reform the current “upside-down” tax code that places the greatest tax burden on low- and middle-income Kentuckians. HB201 would also generate new revenue that would allow meaningful and long-term investments in education, public health, good jobs, a cleaner environment, and strong infrastructure to benefit ALL Kentuckians.   (NOTE: HB201 is an updated version of a bill I’ve filed in prior sessions.  Read more here.

Please note that neither of the lists I’ve provided here is comprehensive, and that new bills – both harmful and helpful – are continuing to be filed.  You can access specific House Bill and  Senate Bill language, and track new bills as they’re filed.

As always, I appreciate hearing your thoughts and concerns. Thanks to the many constituents and friends who’ve already reached out to me this session.  You can email me by responding to this message, or at my legislative email address: Lisa.Willner@lrc.ky.gov.  The toll-free message line for legislators is 1-800-372-7181.