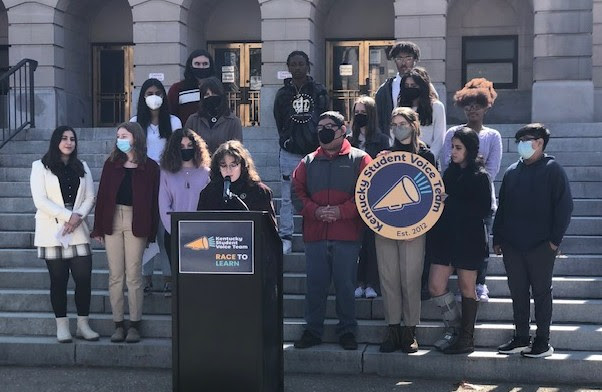 There’s a disturbing national phenomenon that’s playing out in Frankfort with increasing intensity as the legislative session progresses.  It goes like this: ideologically driven “news” outlets promulgate and repeat disinformation; the disinformation creates alarm, public discord, and a demand for solutions to politically-motivated manufactured “problems;” and then policies are created and passed to “solve” difficulties that don’t exist.  Unfortunately, these propaganda-driven “solutions” often create real harms by further perpetuating dangerous disinformation, ignoring evidence of actual problems, and further marginalizing individuals and groups who are already struggling.

Lexington’s Herald-Leader published a piece this week from public opinion writer Linda Blackford with the title, “Absolute GOP power in Frankfort leads to tsunami of bad ideas that will soon become law.”

The headline says it all.

Here are some examples of bad policy ideas that are grounded in false premises and that have been put on the fast track by legislative leaders from the super-majority party.

Part 1 – bad policy ideas that have passed the House

HB8 – tax reform to benefit the wealthy. Grounded in “trickle-down economics,” an approach that has been disproven many times over, one economic policy expert describes HB8 as “the most fiscally destructive legislation in Kentucky’s history.”  The bill would immediately reduce state income tax (currently making up 40% of Kentucky’s general fund), and eventually phase it out altogether.

As we know from the experience of other states, this is a move that benefits the wealthy, widens the wealth gap, and guts opportunities for public investment in services and structures that benefit the common good.  You can find more of my public comments opposing HB8 in the Herald-Leader.

HB 3 – new restrictions on reproductive rights.  This dangerous bill includes no exceptions for when the life of the mother is at risk, or for pregnancies resulting from rape or incest – provisions favored by a broad majority of Kentuckians.   HB3 raises troubling privacy and safety concerns by mandating  extensive documentation of abortion procedures including, for minors, their  place of residence, age, race, and approximate age of the father.  A new mandate on physicians would require them to record “total number and dates of each previous pregnancy, live birth and abortion of the pregnant patient,” as well as the “probable gestational and post-fertilization ages of the unborn child,” and the “reason for the abortion, if known.”  HB3 also requires a “birth and death certificate” for an aborted fetus that includes the name of the mother and father, and the full names and addresses of the physician who performed the abortion and the referring physician.  In committee testimony opposing HB 3, an advocate noted that this provision “essentially create[es] a hit list for anti-abortion extremists.”

With Kentucky already facing crises in maternal and infant health, this bill would make Kentucky an even more dangerous place for pregnant people and children, since evidence shows that states with more abortion restrictions score worse on health outcomes for women and children.

States with more abortion restrictions also have relatively fewer policies that support health outcomes for pregnant people, infants, and families.  That is certainly the case here in Kentucky, where supportive policies such as those put forward by the House Democratic Women’s Caucus go largely unheard.

HB29 – undermining enforcement of federal gun safety laws.  The KY legislature has seen proposals like this one going back at least to 2011, reinforcing the false narrative and political scare tactic that “people are coming to take away your guns.” While nobody is coming for anyone’s guns, Kentuckians are dying as a result of Kentucky lawmakers’ inaction on gun safety.  Data shows that states with lenient gun laws have three times the rate of gun deaths than states with sensible gun safety legislation.  Here in Kentucky (which Everytown for Gun Safety has labeled a “national failure,”) 2/3 of gun fatalities are suicides, and firearms are the #1 killer of Kentucky children and youth.

HB28 – undermining public health.  The bill would prohibit state and local governments and public schools and universities from requiring or even asking about COVID vaccination status for students and employees. While I hope with all my heart that falling COVID numbers indicate the end of the COVID pandemic, this bill hamstrings the public health response in the event of future outbreaks.

HB23 and SB 83 – discriminating against trans youth. These bills targeting trans kids have advanced out of the House Education Committee in two separate meetings.  Twice, I’ve voiced objections and voted no on these harmful policies which are narrowly focused to discriminate against some of Kentucky’s most vulnerable young people.  These bills would prohibit trans girls from participating on their school athletic teams.

Those promoting these harmful and mean-spirited bills claim to do so under federal Title IX protections, even though Title IX prohibits  discrimination based on gender identity.

I noted in the committee hearing that, in addition to wrongs inflicted on individual kids, anti-LGBTQ discrimination is bad for economic development.  I’m grateful to the 150+ Kentucky businesses for their letter to legislators opposing these unfair and misguided  bills.

Part 3 – bad policy ideas that have passed both chambers

HB4  – slashing unemployment insurance benefits  Under this punitive policy, Kentucky workers take a big hit. Starting in 2023, UI benefits will rise and fall based on the unemployment rate; and after just six weeks, applicants will have to accept any job for which they are qualified if the salary is marginally higher than their UI benefits and is within 30 miles of their home, even if the job is outside of their career, or pays significantly less than their previously held job.

Senate Joint Resolution (SJR) 150 – legislative overreach in managing the pandemic.  SJR150 would immediately declare an end to pandemic-related executive orders and state-issued regulations.  This actually undercuts the legislature’s own actions earlier this year, when the House and Senate originally set the ending date for April 14th.  One of the soon-to-be rescinded regulations makes it possible for qualified Kentucky families to receive amounts totaling $52 million extra in federal SNAP food benefits each month.  There is simply no reason for this resolution that justifies taking food off the table for families in need.

While I expect the Governor will veto HB4 and SJR150, overriding the veto takes only a simple majority – 51 votes in the House and 20 in the Senate –  so it appears that both of these policies are well on their way to becoming law.

Even in this challenging environment, bipartisanship is still possible, and there are some good policies advancing.

HB354 will increase access to healthcare by removing some restrictions that have prevented Advanced Practice Registered Nurses from practicing to the full extent of their scope and training.  This bipartisan measure passed the House this week and advances to the Senate.

HB136 would add Kentucky to the list of states authorizing medicinal cannabis.  The bill cleared the House Judiciary Committee on Thursday and should be before a receptive House this week.  With a longtime Senate opponent now supportive of the bill, there’s a good chance this will become law.  Although I wish the bill were broader, HB 136 is a positive step.

HB31, the C.R.O.W.N. Act (Creating a Respectful and Open World for Natural Hair) passed out of committee this week.  If enacted, it would end hair-based discrimination. Kudos to my friend and colleague Rep. Attica Scott for her persistent work on this bill, and to the student groups who’ve repeatedly come to Frankfort to support it.

My Herald-Leader op ed, along with Senate Morgan McGarvey and Child USAdvocacy director Kathryn Robb, on the importance of lifting the statute of limitations in cases of child sexual abuse and assault.  It is simply not acceptable for Kentucky to be the most dangerous place in the country to be a kid.

There are of course many other issues moving through the legislative process, including the state budget, and the session days are long and getting longer as we move into the last weeks of the session.

As always, I’m grateful to the many District 35 voters who’ve reached out to advocate on issues mentioned in this update, along with many other important issues before the General Assembly.