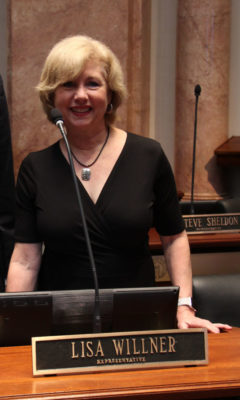 What a week! I was deeply honored to be sworn in as the State Representative for the 35th district on the first day of the session, with both my mother, Eugenia Willner, and husband, John Scruton, as well as some dear friends in attendance. I will never forget that my election was made possible by the hard work and sacrifice of a wonderful team of supporters, and that I hold the seat in Frankfort because of the people of the 35th district. I will do my very best to represent you with integrity, and to be your voice in Frankfort.

In odd-number years, we have a short 30-day session. For many years, the conventional wisdom has been that nothing much happens during the short sessions, but two big events occurred this week that turn that thinking on its head, and that could have repercussions for many years to come.

The first issue centers on Representative Jim Glenn of Owensboro who won his election last November by a single vote. Despite Rep. Glenn’s election having been certified at both the local and state level, despite a re-canvassing of the votes yielding the same result, and despite the Representative having been sworn into office, his opponent has requested that the Kentucky House review the election’s outcome, and in an unprecedented move, the House established an Elections Review Committee to examine – and possibly overturn – the certified election results.

While the outcome was very close, I stand by the fundamental tenet of our democracy that the candidate who receives the most votes is the winner of the election. That should stand whether the win is by one vote or a thousand. Nevertheless – here we are, with a panel of nine randomly selected legislators reviewing the matter. I will be keeping a close eye on this situation.

To the second issue… with the session barely underway, legislators learned that Governor Bevin’s administration had begun implementing stringent and repressive new rules that severely limit public access within the Capitol complex, citing safety concerns as the rationale. Safety is important, but it appears to be more than a coincidence that these new restrictions follow on the heels of a 2018 legislative session that brought unprecedented numbers of peaceful protestors to the Capitol. Although these changes are coming from the executive branch, I will do all that I can to make sure that the People’s House is fully welcoming and open to the People.

On a happier note, I was excited to have my committee assignments confirmed this week. I will be serving on Education; Health & Family Services; and Veterans & Military Affairs and Public Protections – 3 committees very important to me, and to our district.

On the first day of the session I filed my first bill – HB 126 – that would bring much-needed transparency and accountability to the oversight of Kentucky’s public pensions. On day 2, the bill picked up over 20 co-sponsors, and Joe Sonka of Insider Louisville published a strong piece about it.

School safety is the top priority issue for leadership in both the House and Senate, and identical bills – HB1 and SB1 – have been filed. While I’m still working my way through some of the intricacies of these sweeping bills, I was very happy to see last year’s HB 604 included in its entirety. HB 604 (2018) is the “Trauma-Informed Schools Bill” that I co-authored along with Will Coursey, the former State Representative from Marshall County, in the wake of the tragic shooting that took place there last January. HB 604 had the support of a broad range of mental health, law enforcement, and educator groups, and passed the House with near-unanimous bipartisan support before stalling in the Senate. I’m happy to see it back again in 2019.

My last bit of news from the week is that I was selected by my House colleagues to chair the Democratic Women’s Caucus, alongside State Representative McKenzie Cantrell who will serve as vice chair. This is a particularly exciting time for that, as we now have 18 Democratic women State Reps in the Kentucky House: 46% of the entire Democratic House delegation, and a decisive majority of the Jefferson County delegation. It is an honor and a privilege to get to work alongside this amazing group of intelligent, compassionate, energetic, and gutsy women.