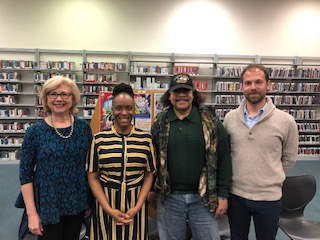 This was Week 1 of a 3-week recess, but very busy nonetheless! I’ve had a number of meetings, both in Louisville and in Frankfort, to get to know constituents and a variety of their priorities and concerns, as well as with legislators and community advocates to work on legislation.

Two of the issues I’m actively working on are bills that would improve safety for children and youth.

One is a bill sponsored by Rep. Steve Riley, a rural Republican legislator and a retired educator, that would ban the harmful practice of corporal punishment in our public schools. While many individual districts have banned the practice at the local level, Kentucky is still in the minority of states in the country that allow it. I’ve had some productive conversations with Rep. Riley, as well as with an outstanding group of high school student advocates who’ve been working on this initiative since they were middle schoolers. I’m very happy to work with one of the group’s leaders, St. X freshmen Alex Young, on this project. I actually met Alex while going door-to-door in the 35th district during the campaign, and it’s exciting to be working with him to increase student safety in all Kentucky schools!

Another bill that I’m working on would ban the discredited and dangerous practice of so-called “conversion therapy” on minors. The rate of suicide and suicide attempts for LGBTQ youth exposed to the practice is staggering. My former State Rep. Jim Wayne filed a similar bill last session, and – as the only mental health professional serving in the Kentucky legislature – I’m grateful for the opportunity to carry on his good work to protect young people from this abusive treatment. (If you have a chance to see the recent film “Boy Erased,” I highly recommend it. Bring tissues.)

Speaking of safety, SB1 and HB1 are identical bills focused on comprehensive school safety, and a clear indication that school safety is the #1 priority for both the House and the Senate this session. The majority leadership in both chambers have made a good faith effort to craft a bill that would have bipartisan support, and have worked with stakeholders across the state. There are many positive aspects to the bill, including additional social and emotional supports for students and school staff, and adding school safety coordinators to school districts. The Trauma-Informed Schools Bill – HB 604 (2018) – that I co-authored last session is included in the bill.

The major reservation that I have about SB1 and HB1 is a requirement for every school to employ a law enforcement officer. While there are many schools and parents across the state who want that, I’ve already heard from many parents in my district who have concerns about policing in schools. (I’ve suggested that an easy fix may be to give SBDM Councils the authority to make that decision for their school at the most local level.) HB 1 has been assigned to the House Education Committee, where I will have an opportunity to weigh in, so please let me hear from you!

HB1 and SB 1 are just starting to move, but two other education-related bills – SB 3 and SB 8 – are already halfway to the Governor’s desk after clearing the Senate in just four days. Both bills are problematic.

Senate Bill 3 would weaken governance at the most local level, the Site-Based Decision Making Councils (SBDMs), by giving superintendents the councils’ authority to hire principals. This appears to be a solution in search of a problem, since SBDMs have worked well since they were first adopted as part of the Kentucky Education Reform Act in 1990. A change to SBDMs that would be well worth considering would be the addition of a seat for classified school staff, since that is an important voice that too-often goes unheard.

Senate Bill 8 would change the tribunal system, the process for teachers to appeal dismissals. I believe the tribunal process could be improved, but I also believe that good policy comes out of authentic grassroots engagement with the people most affected. In the case of SB 8, teachers were excluded from the conversation as the policy was developed, and I have a concern that the bill may undermine due process.

Another major education bill expected to be filed this legislative session would establish a funding source for charter schools, which were authorized in 2017 but are in limbo until state financing is established.

At a time when the state can only afford about a dime extra per day for each student – and not even an extra penny for textbooks or teacher training – we cannot afford to remove any money from our public schools. Given the problems associated with charter schools in other states, I believe we need to end this charter-school experiment before it takes root in Kentucky.

If those last few bills take public education in the wrong direction, two others I support would put our children on a much better path. House Bills 112 and 113, sponsored by fellow Jefferson County freshman State Representative Josie Raymond, would have Kentucky provide full–day kindergarten, and add public preschool for every 4-year old. Currently the state funds Kindergarten at only 50%, leaving the other half-day funding to be picked up by local school districts. There is currently only very limited funding for preschool, although the research is clear about the positive impact of good and developmentally appropriate early education.

On a different topic… last week I wrote about the “emergency” regulations that limited public access to the people’s State Capitol. We received word late yesterday that one of the restrictions has been reversed, and the public will be allowed to use the tunnel connecting the Capitol and Capitol Annex buildings, although gathering or demonstrating in the tunnel is still prohibited. This is a small but significant step in the right direction. I hope the public will continue to demand access to THEIR Capitol, and that we will see other restrictions reversed as well.

Your presence and your voice are critical to the Democratic process.

The General Assembly will return on Tuesday, Feb. 5th, to complete the remaining 26 working days of this year’s legislative session.