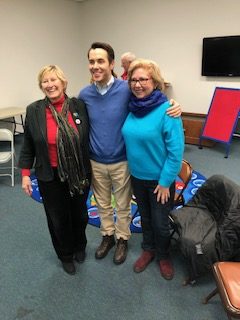 Week 3 of the 3-week recess is behind us, and Part II of the Legislative Session begins this Tuesday, gaveling in at 4:00.

My focus as a State Rep during the recess has been to meet with constituents, read up on bills, and provide opportunities for engagement.

To that end, I was glad to co-host a Legislative Town Hall this past Wednesday, along with State Representative Mary Lou Marzian and Democratic Leader State Senator Morgan Mcgarvey. We were heartened by the great turn-out, especially given the bitter cold that evening! We are hoping to offer at least one more Town Hall event before this year’s short session comes to a close.

There was good discussion and engagement around our public pensions, with Sen. McGarvey giving a thorough report-out from his participation on the bipartisan Public Pensions Working Group. We also had a chance to discuss HB 126, a bill I’ve sponsored that would increase transparency and accountability in the oversight of our public pensions. That bill has been assigned to the House State Government Committee.

We also discussed SB1 and HB1, the twin “School Safety and Resiliency” bills, that are the top priority of both chambers of the General Assembly. While there is much to applaud in the bills, there are some areas to be concerned about, including a proposed requirement for every school in the Commonwealth to hire or contract with an armed law enforcement officer. The bills, as currently drafted, would require the hiring of more than 3 times as many law enforcement officers than licensed mental health professionals.

On that topic, I participated in a KET-TV hosted Live Town Hall that was recorded last week, and will air on February 11th at 8pm.

Also last week, I attended a Community Noise Forum meeting, hosted bi-monthly at Airport Authority. I’ll take this opportunity to give a shout-out to Representative Jeff Donohue and State Representative McKenzie Cantrell for sponsoring HB 122, an act relating to tax credits to homeowners for airport noise mitigation. This good policy actually passed both the House and Senate in 2016, only to be vetoed by the Governor. The bill has been referred to the House Appropriations and Revenue Committee. I encourage you to contact the Legislative Message Line and to leave messages for the Chair and members of that committee if you would like to see the bill get a hearing this year.

Rounding out some of last week’s highlights, several members of the women’s Jefferson County delegation spent a great hour+ with University of Louisville President Neeli Bendapudi in a free exchange of questions and ideas, and heard about the new UofL strategic plan, and Dr. Neeli’s vision of putting students first, while benefiting our local community and the Commonwealth as a whole.

And finally, a quick note from the House Democratic Women’s Caucus. At our organizing meeting a couple of weeks ago, there was unanimous concern from our members about the harsh limitations placed on public access to the people’s State Capitol building. We were told that barriers to public access were a result of safety recommendations from the State Police and Kentucky Firefighters, and that supporting documents would be made available upon request. Although the Women’s Caucus formally requested those documents more than three weeks ago, none have been provided to date. I will continue to keep you posted on how this progresses.