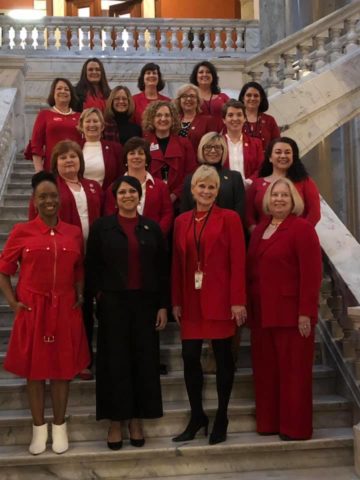 The 2019 regular session resumed this past Tuesday, with days 5-8 of this year’s 30-day session. We will continue to meet throughout February and early March, then break for several Veto Days. Between now and the end of the session in late March, we can expect a flurry of activity!

Relatively few votes were taken last week, but this was an important time for committees to meet, to meet with constituents and advocates, and to solidify priorities. To that end, the House Democratic Women’s Caucus met this week, and adopted several bills as our shared priorities.
These are:

HB 113 – to provide state funding for public Kindergarten. (Currently, the state only funds ½ day Kindergarten, with most local districts picking up the balance.)

HB 126 – to increase transparency and accountability in the oversight of Kentucky’s public pensions.

HB 83 – to increase protections against sexual harassment in the State Capitol.

The Health and Family Services Committee unanimously passed two very positive bills that will be on tomorrow’s consent agenda for a vote in the full House. HB 11 is a statewide smoking ban on public school campuses. HB 121 would eliminate the requirement for insurance companies to authorize the prescribing of life-saving anti-addiction drugs such as methadone. There are too many stories of death by drug overdoses during time-consuming prior authorization periods. I’m hopeful that HB121 will move quickly through the House and Senate and be signed in to law before one more life is lost.

Senate Bill 1 – the school safety bill that is top priority for both House and Senate leadership – unanimously passed out of the Senate last week, and will be heading to the House for action on that side. I was dismayed to read that, in the new version of SB1, licensed mental health professionals have been eliminated from the Bill language. I have no doubt that SB1 is well-intended, but this was a change in the wrong direction! The good news is that there appears to be willingness to continue making adjustments to the policy.

In other news, we learned on Friday that Rep. Jim Glenn of Owensboro will be allowed to serve his complete term following his opponent’s decision to drop an election contest. You may remember that Rep. Glenn won his seat by a single vote last November. The election was certified both locally and statewide by election officials, and Rep. Glenn was sworn in and assigned to committees.

The election contest was brought before the House last month, in part because more than a dozen absentee ballots were rejected in November (by a bipartisan elections panel) because they did not meet statewide standards. A recount a little more than a week ago showed Rep. Glenn did indeed win the race, but after some of the ballots that had been rejected were accepted, the outcome was a tie. Fortunately, Friday’s events put an end to this issue.

This week also brought us the Governor’s State of the Commonwealth speech. The Governor appears to have shifted into campaign mode by staying away from bomb-throwing and insults, and focusing instead on issues that we can all agree on: improving school safety, addressing the opioid epidemic, and increasing adoptions of the nearly 10,000 young people currently in the state’s foster care system. The tone is certainly a welcome shift, although the speech was short on vision or economic policy to genuinely address these very real challenges.

On the economic front, we did receive some good news last week. The Kentucky Department of Agriculture reported to the House Agriculture Committee that it has approved requests by farmers to grow as many as 42,000 acres of industrial hemp in 2019. That’s up from 16,000 acres last year and just 33 acres in 2014, the first year the crop could be grown in Kentucky. It will be interesting to keep an eye on this growth area for our state!

And the Kentucky Distillers Association reported that the number of distilleries in the state and the value of their spirits have tripled over the past decade. The payroll for those working in the industry now tops $1 billion, and there were 1.4 million people who visited the Bourbon Trail in 2018 – nearly four times as many as in 2009.

I will keep you updated on these and many other issues facing the General Assembly, and I encourage you to keep letting me know your thoughts as well. Your calls, emails, letters and in-person visits are so important.