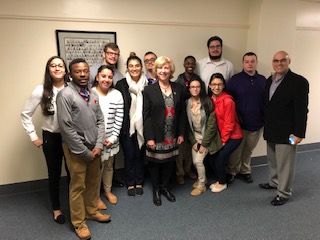 We were back in full swing this week, with a number of bills moving out of committee and onto the House floor. The committee structure is really important, since that’s where much of the substantive work is done on the bills that will eventually be signed in to law.

The Kentucky House has 16 standing committees that consider legislation. The three that I serve on are Education; Health and Family Services; and Veterans, Military Affairs, and Public Protections (VMAPP). All of the committees have many bills referred to them, but the committee chairs have a good deal of discretion about which bills will actually be placed on the committees’ agenda for discussion and consideration. Many of the bills that are filed during the session never get to a committee hearing.

An important bill that did pass through committee this week is HB60, a bipartisan anti-sexual harassment bill that would make our Capitol a safer place to work and to serve. A smoking ban for K-12 public schools, HB11, has also sailed easily out of committee. HB11 is broadly supported by numerous health advocates and advocacy groups, and would improve the health and economic outcomes for our students, and improve the public health outcomes of our state. I’m hopeful that both of these bills will get a hearing and a yes vote so that they can head over to the Senate for consideration in that chamber.

Looking to the week ahead, I expect that the education committee will have hearings on SB1, a school safety bill, and HB202, a bill that would ban corporal punishment in our public schools. I also expect to be presenting HB323 in the VMAPP committee, a bill that would ease barriers to employment for military spouses when they move from one state to another.

It has been interesting to have a close-up seat to how legislation evolves through the democratic process. I received a LOT of input this week from voters – overwhelmingly opposing but a few supporting – on SB100, a bill expected to have a significant impact on Kentucky’s budding solar energy industry. I voted no on the bill, and while it did pass the House, the version of SB100 that passed the House was drastically different from the version passed by the Senate. The next step with this controversial piece of legislation will be for members of a conference committee to work together to try and hammer out the differences. While the process can be messy, this is actually how our democracy is designed to work – bringing diverse voices and perspectives together, and sitting down together to find a way forward.

Another bill to come out of committee on Thursday is actually on track to be the first sent to the Governor for his signature. This is a simple bill, but an important one since it would increase public transparency by requiring electronic filing of all campaign finance reports. This change would speed up the process to get information online and available to voters. Most of these reports are now filed on paper, which takes time and resources for election officials to enter manually. If this bill becomes law, it will take effect during the 2020 primary.

Although debate from opposing sides is built into the legislative process, there are other moments where there is broad consensus. We saw an ideal example of that on Tuesday, when House and Senate members from both parties came together to announce the formation of the Engage & Empower Caucus. This caucus is designed to serve as a focal point for legislation that would help the estimated 874,000 Kentuckians with a disability. With big thanks to co-chairs Representative Al Gentry (D-Jefferson) and Rep. Brandon Reed (R-Green, Larue, Marion), I was deeply honored to be invited to serve as one of the inaugural members of the new caucus. Among legislation that the Engage & Empower Caucus will promote this year is a bill to help people with disabilities retrofit their homes, and bills that would increase health insurance coverage for prosthetics and durable medical equipment.

One of the best aspects of legislative sessions is the sheer number of people who visit the Capitol. There have already been thousands who have come to support or oppose a bill,or just to make legislators more aware of causes important to them. This week we saw students advocating for increased support with career and technical education, and heard from community members advocating to end the dangerous practice of conversion therapy, along with folks representing many other causes.
On Thursday, there was a rally in the Capitol Rotunda in support of affordable housing. Kentucky has a much higher percentage of people who struggle to find a place to live within their budget, but such organizations as Habitat for Humanity and the Homeless and Housing Coalition of Kentucky are making a profound difference when it comes to improving those numbers.

Wednesday was Kentucky’s 15th annual Children’s Advocacy Day, which focuses on improving the overall well-being of our youngest Kentuckians. Some of the proposals highlighted include limiting the skyrocketing use of e-cigarettes among adolescents and young adults; providing more mental-health professionals in our schools who can recognize and treat behavioral issues early on; and doing more to help young adults transitioning out of foster care.

In the week ahead, we reach the halfway point of the 30-day session, so the pace to approve bills is set to quicken. We will wrap up much of our work by mid-March and complete the session by the end of that month.