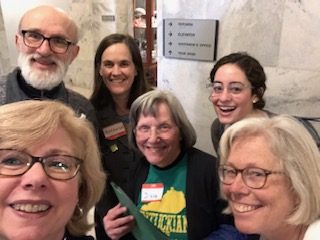 This week, the volume of phone messages and emails from voters and advocacy groups increased dramatically. On several bills, I received messages from voters asking me to support, and from others asking me to oppose. In the ethical code of conduct for psychologists, our first principle is to do good and not harm. I apply that same principle when making decisions about how to vote on legislation by asking myself if the bill would cause greater harm or greater good. Additional points in making decisions include listening to the views of those most affected by any given bill, as well as considering what role, if any, the legislature has to play in a given issue.

Last year, the General Assembly passed a major tax overhaul that caused a good deal of harm. I thank my predecessor and many of my current colleagues for their fierce opposition to the 2018 tax “reform” bill that raised taxes on 95% of working Kentuckians, even as it lowered taxes on major corporations by hundreds of millions of dollars. This harmful bill was presented and passed on the very same day.

Among other harms caused by this rushed legislation was a big financial hit to non-profit organizations that lost several long-held exemptions. On Thursday, the House moved to correct that mistake by passing HB 354 with a 96-4 vote. While the bill exempts nonprofit organizations from sales tax on admissions and on their first $10,000 in sales, it also sneaked in an additional corporate giveaway. I voted in favor of the bill, but it was not as easy a decision as it would have been if we had been presented with a “clean” bill.

There were several good bills passed out of the House this week including HB 158, which passed with a 99-0 vote. The bill would create a foster child’s “bill of rights,” a list of 16 rights for our nearly 10,000 Kentucky children in foster care, that include rights to adequate food, clothing, shelter, and the right to a safe, stable family. The bill would also require national and state background checks on child residential home and placement agency staff as required under new federal law.

House Bill 64 also passed overwhelmingly, and would let pharmacists dispense an emergency prescription refill for maintenance drugs, such as insulin, without prior authorization by a physician. Removing the barrier of prior authorization could mean the difference between life and death for those in critical need. As a member of the Health and Family Services Committee, it was powerful to hear testimony from those most affected.

House Bill 180 could also be a lifesaver for veterans with PTSD or who are otherwise at risk and have been reported missing. If it becomes law, local authorities would be able to activate the Golden Alert system currently used to make the public aware of a missing adult with a mental impairment. For veterans who fall under this new category, this would be known as a Green Alert.

Also this week, the House voted overwhelmingly in favor of a bill to provide needed financial relief to public universities, public health departments, and critically-needed repairs to state parks.

On the question of topics suitable for legislative action, I opposed HB 166 that would establish “A Day of Prayer for Kentucky’s Students.” In my comments on the House floor, I stated that I do not oppose prayer (which is, in any case, fully protected under the Constitution), but that I oppose the legislating of prayer by politicians. The bill passed 79-18.

Highlights of the past week include the annual African American History program in the rotunda, visits from UofL STEM scholars, the KY Arts Council, and advocates for families faced with the challenges of patient care for Alzheimers, as well as the many individuals and groups who came to the Capitol last week to share their stories and concerns.

We are now in the second half of the 30-day 2019 session, with just 13 legislative days remaining. A shorter calendar will mean longer days trying to find compromises on numerous bills. As always, please keep visiting, calling and emailing to let me know your views.