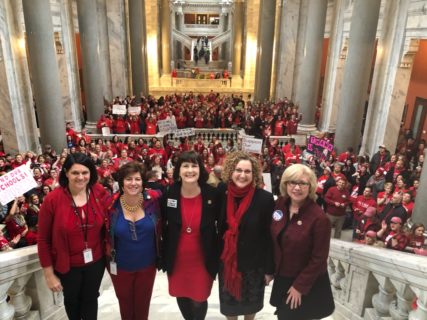 I’ve maintained equanimity in my past weeks’ legislative updates, but the dangerous legislation and the hypocrisy on full display in the House this week cannot go ignored or unmentioned.

On Wednesday, the House voted to approve SB1, an unfunded school safety bill that adds some mental health resources, but mainly focuses on “hardening the target” for mass shootings at schools. Then on Friday, the House voted 60-37 to pass SB 150, a bill to allow concealed carry of firearms without training or permit.

I was the first, but not the only House member, to point out the hypocrisy of congratulating ourselves one day for our commitment to keeping kids safe, while voting two days later on legislation that undermines safety. SB 150 completely eliminates the concealed carry permitting system that has, over the past 20 years, kept concealed firearms out of the hands of over 10,000 felons and domestic abusers in our state. While mass shootings in schools grab headlines as well as public focus and outrage over these horrible incidents, the truth is that 86% of childhood deaths by mass shooting occur not in schools or by the hand of strangers, but in family and domestic violence incidents. The passage of SB150 puts Kentucky children at additional risk.

Law enforcement agencies across the state – Louisville Metro Police Department, the Kentucky Sheriff’s Association, and the state Fraternal Order of Police, among others– all opposed the passage of SB 150. In fact, even as the 2+-hour House debate over SB150 raged on, the state FOP was sending out its own messages warning of the bill’s potential “deadly consequences.” Still, 60 members of Kentucky’s House of Representatives, voted Yes on SB 150.

In the same day that SB 150 passed the House, Gov. Matt Bevin announced to the Conservative Political Action Conference (CPAC) that he will sign the bill in to law. His message to the thousands of Kentuckians who oppose the dismantling of responsible gun ownership? “And for those people who are offended at this idea and don’t like it, there are other places in America where they could live.” Despite the Governor’s call to “Love it or leave it,” my plan is to continue fighting and standing up for the safety and the common good of Kentuckians every single day.

While priority legislation being pushed by the majority party in both the House and Senate focuses on numerous wedge issues, there is little to no serious legislation to address real concerns of the people of the 35th district – the opioid crisis, aging public infrastructure, relief for working families, access to health care, disabilities issues, unprecedented numbers of children in foster care, retiree concerns, pension funding, funding for public schools, etc.

Meanwhile, good bills are being blocked, while legislation that would cause additional harm are being fast-tracked.

The arrival of hundreds of teachers at the Capitol last Thursday made it feel like 2018 all over again. They came to Frankfort to oppose yet another unfair and unnecessary bill directly affecting the Kentucky Teachers Retirement System. Last year’s rallies were focused on current and future benefits, while this year’s is about the very governance of KTRS itself. Some say the bill making its way through the legislature now – HB 525 – could have a bigger impact than the public-pension “Sewer Bill” that was unanimously struck down in December by the Kentucky Supreme Court.

House Bill 525 is wrong for Kentucky, and is a solution in search of a problem. Educators oppose HB 525 because it significantly diminishes their role in determining the 11-member KTRS Board of Trustees. Teachers would see their current authority to nominate seven trustees reduced to two, with most of the remaining nominations coming from an array of educational organizations. Certified public accountants – who are not even backing this approach! – would have a seat on the board as well, even though current law already requires trustees with investment experience.

The final fate of HB 525 is still uncertain, given the relatively few remaining days left in this year’s legislative session. But as we saw with last year’s Sewer Bill, proposals like this that have the backing of the majority party in both the House and Senate have a way of moving quickly.

On one positive note, my colleagues and I unanimously voted for HB 60, a bipartisan bill to strengthen sexual harassment policies governing the Legislative Branch. My goals in running for the Kentucky House included finding ways to work in a bipartisan way to advance the common good, and to change the culture in Frankfort. HB 60 meets both goals. While the legislation is not perfect, it is a meaningful first step toward making our State Capitol a safer place – especially for women – to legislate, work, and visit.

Beyond legislation, it was an honor to participate in this year’s annual Rally for Fairness in Frankfort! With record numbers of co-sponsors for statewide Fairness, and the bill to ban the dangerous practice of conversion therapy, there is much to celebrate, even as we know there is still much work ahead.

As far as visitors, I had great conversations this week with groups of student advocates from Marion C. Moore, and from Mercy Academy. These social justice champions are on a path to change the world!

So far, only a relatively small number of bills have been sent to the Governor to be signed in to law, but we can expect for that to change this week and next. As the General Assembly makes final decisions on what will become law, and what will wait another year, I hope you will continue letting me know your views. We are scheduled to wrap up our work by the end of this month.