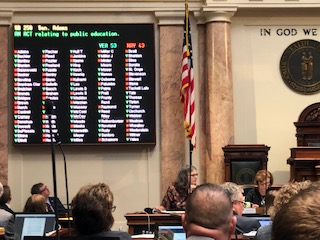 Another wild ride in Frankfort this week! But compared to the onslaught of problematic legislation that flew through the House during the week prior, relatively little legislation was voted on this week, and the bills that were voted on were mainly noncontroversial.

Still, there are some very problematic bills hanging out there which still have an opportunity to pass during the next three legislative days when we re-convene next Tuesday, Wednesday, and Thursday. Those three days will take us through Day 29 of the 30 day session. After Thursday, we will recess for several days as we enter the Governor’s veto period. Then we come back for one final day on March 28th with the opportunity to legislatively override any vetoes.

This is my first session, but I have certainly observed as an outsider that a lot of mischief can happen in the final days of session. Last year’s teacher pension “Sewer Bill” is an example. Rushing bills through in the final days, attaching bad bills to otherwise good bills, is simply bad legislative process. It makes it very difficult for legislators to keep track of bills in any kind of meaningful way, and sets up enormous barriers to public input. We simply must do better.

In the meantime, the General Assembly has a long list of bills still awaiting final decision.

Several that generated headlines and public outcry this past week are education-related, and drew thousands of teachers to the Capitol to make their concerns and their voices heard. There are four bills of particular concern to educators, and to those of us who support public schools.

House Bill 525 would significantly alter how the board of trustees is selected for the Kentucky Teachers Retirement System (KTRS), and would significantly reduce teacher voice. Teachers have long had the authority to nominate seven of the 11 trustees, but that would effectively drop to two under this bill. Most of the remaining nominations would be made by education-oriented organizations. KTRS is an outstanding retirement system that stands alongside some of the best in the country. As I said in last week’s wrap-up, HB 525 is a solution in search of a problem. The good news is that the legislation has not cleared the House by the end of the week, and it’s possible that we will run out the clock on this poorly-conceived legislation.

The same can be said of House Bill 205, which also has not been considered yet by the entire House. It would authorize up to $25 million in tax credits annually for those who donate to private elementary and secondary schools to boost scholarships. While the bill is promoted as being a help to poor families, that is simply not how this type of legislation has played out in other states, where the majority of scholarship funds went to students already attending private schools. The $25 million credit is predicted to grow in future years, at great cost to our meager public coffers. There are significant constitutional concerns about this legislation, in addition to the funding concerns for our public schools and other public services.

(For another perspective opposing HB 205, I encourage you to take a look at an op ed entitled “Why Catholics should oppose Kentucky private school tax bill,” posted elsewhere on my page. The piece was written by our past District 35 Representative, the Honorable Jim Wayne.)

Senate Bill 250 is an education bill that only applies to Jefferson County Public Schools. The section of the bill drawing the most public opposition is that it reduces the authority of Site Based Decision Making Councils in principal selection. In reality, superintendents already have tremendous authority over principal selection, and I share the concerns of many of the bill’s critics that it threatens teacher voice and parent input.

While these three bills are are still pending, a fourth – Senate Bill 8 – was sent to the Governor for his signature on Thursday. The bill overhauls the teacher tribunal process and diminishes public voice in hearings that are an important part of due process for teachers and other certified employees. I spoke against the bill on the House floor, and cast a no vote.

HB 354 would, among other things, fix a small portion of last year’s tax overhaul so that non-profit organizations would get back many if not all of the exemptions they lost last year. I opposed the 2018 tax changes which gave tax breaks to the wealthiest Kentuckians, and would like to see the entire tax structure overhauled. In the meantime, I believe we must offer some relief to our non-profits, which do so much for the people of the 35th district and across the state. But this is a bill I think we need to watch carefully for what could be added into it in the final days. In the end, this and the related HB 268 – which opens the budget for other projects – could turn out to be quite consequential.

Another innocuous-sounding but quite dangerous bill to watch is HB 254, a so-called “free speech” bill applying to public colleges. The bill does nothing to add to free speech protections already provided through our Constitution, but slides in a problematic definition of sexual harassment that would make it much more difficult for sexual assault victims to report. The Kentucky Association of Sexual Assault Programs strongly opposes the bill.

On Wednesday, the House Judiciary Committee approved House Bill 136, a bill to legalize medical marijuana, putting us in line with more than 30 other states that have taken similar or more far-reaching steps. Time appears to have run out for the bill to pass this session, but this represents progress on the issue compared to prior sessions.

The very dangerous anti-transparency bills – SB 193 and HB 387 – that would have turned Kentucky’s important “sunshine” laws on their head, appear to be dead this session. That these bills were even filed in the first place is troubling enough. Let’s celebrate their demise!

If you would like to know more about these or other bills, please visit the General Assembly’s website at www.legislature.ky.gov. If you would like to add your voice to those supporting or opposing these measures, meanwhile, please don’t hesitate to reach out. Although I’ve not been able to keep up with responses to all your messages, I assure you that I’m reading every one of them. Your voice matters.