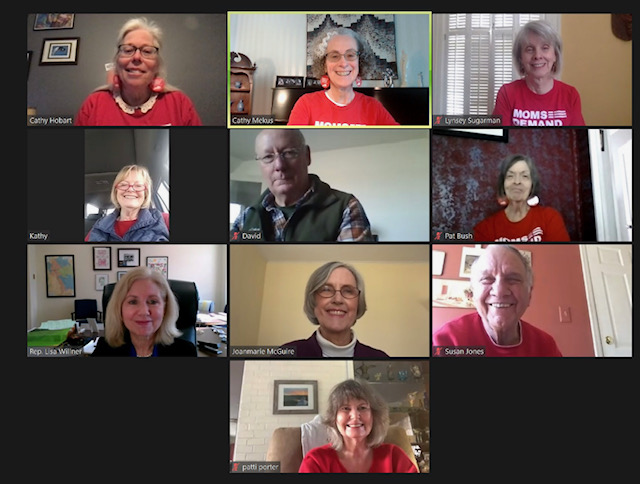 Dear Friends,
This week, we reached the halfway point of the 2022 legislative session. This is a good moment to take a broad look at the session so far, reviewing what’s happened, and considering what may be still to come.

Reaching the halfway point on the calendar doesn’t mean the legislature is halfway through passing bills. Fewer than 10 bills have become law so far, but dozens of others will certainly follow suit as the pace continues to pick up, and as the House and Senate begin hearing more of one another’s bills.

The legislature’s biggest issues – adopting a two-year budget for state government and redistricting – are both still in holding patterns, although for different reasons.

The Kentucky House voted for its version of the Executive Branch budget on the session’s 12th day, weeks earlier than in past budget sessions.  Meanwhile, the spending plans for the Legislative and Judicial branches and the state Road Fund still await committee hearings.

Republican House leaders say they expedited the executive branch budget this year so they could focus on tax reform.  This is worrisome for (at least) two reasons. Under the Republican majority, tax reform has meant “trickle-down” approaches that benefit corporations and the wealthy, while increasing the tax burden on everyday working Kentuckians.

And transparency is another very real concern.

In 2018, the last time the legislature voted for major changes to the tax code, the majority party’s plan was made public and then approved by the General Assembly on the same day.  – a breathtaking and brazen move for such consequential policy change.

The fate of redistricting rests currently in the courts, with arguments to be held early next month.  This week, Judge Wingate declined to issue a stay on the redistricting plan, but also declined to dismiss the case altogether.  The case centers on the new state House map – which I believe unfairly minimizes urban areas’ legislative voice – and the Congressional map.  The proposed Congressional map features what may be one of the country’s most oddly drawn districts, beginning at the Mississippi River and stretching along much of the Tennessee border before snaking up to include our state capital.

Among this session’s new laws, one sets aside $200 million for communities affected by December’s deadly tornadoes, while two others are pandemic related. Of these, one recognizes the essential caregiving roles of family or close friends for patients in long-term care, and guarantees these caregivers the ability to spend time inside facilities while pandemic rules are still in place.  The other increases some flexibility for schools to provide remote instruction during the pandemic.

House Bills on the Move

The House has passed several positive bills and referred them to the Senate. I’ve highlighted several of these in past updates.  The latest to join this category is House Bill 174, which would extend Medicaid’s postpartum coverage for new mothers for up to a year. HB174 is part of the Kentucky House Democratic Women’s Caucus’s Kentucky Maternal and Infant Health Project, a slate of proposals designed to improve Kentucky’s abysmal outcomes for infants, children, and pregnant people.  While the US ranks last among wealthy nations in these areas, Kentucky’s outcomes are at or near the bottom nationally on multiple dimensions.  Lengthening Medicaid coverage for many new mothers is an important part of what needs to be a multi-pronged solution.  HB174 passed the House unanimously.

House Bill 222 would add Kentucky to the list of 30 or so states with anti-SLAPP (“strategic lawsuit against public protection”) laws.  SLAPP occurs when a powerful person or organization frivolously uses the courts to silence critics.  Congratulations to Rep. Nima Kulkarni for her work on this legislation since 2019, and on its unanimous passage in the House!

This week, the House also voted overwhelmingly for House Bill 250, providing $23 million for Kentucky State University – Kentucky’s only public Historically Black College and University –  to finish the fiscal year, and establishing a plan to put the university on stronger financial footing.

Other bills to clear the House in the last seven weeks include HB44 to add mental health as a valid reason for an excused absence in schools; HB56, which would provide $80,000 in-the-line-of-duty death benefits to families of first responders who die from COVID; HB317, which would make it easier for charitable organizations to help Kentuckians who cannot pay premiums or other payments to their health insurers; and HB127 to help break the cycle of homelessness to incarceration to involuntary hospitalization for more Kentuckians with severe mental illness.

Some more problematic bills on the move include HB4, which would slash unemployment insurance payments, and HB63 that calls on all schools to have armed school resource officers by this summer or as soon as possible.  This one-size-fits-all bill undercuts local decision-making and puts a sizable unfunded mandate on school districts for an approach that is not supported by evidence to make schools safer, and increases the risk for Black students to become involved with the criminal justice system over school discipline issues.

Several especially problematic bills have moved through the House Education Committee, including two that passed out of that committee this week.  HB23 cruelly and unjustifiably bars trans female students from participating on sports teams offered by their schools, and targets middle school students in particular. Another, HB51, would keep school districts from enforcing mask mandates – at a time when 112 out of 120 Kentucky counties are still in the red zone for COVID, and when schools are struggling to remain open due to COVID-related teacher and staff absences.  Ironically, HB51 passed out of the House Education less than six months after the General Assembly voted in special session to give school districts the authority to make decisions about mask requirements.

I’m incredibly grateful to the many District 35 voters who have reached out to advocate or thank me for a NO vote in committee on HB51 and HB23, and for your advocacy on so many other important issues before the General Assembly.  It’s still impossible to predict what will become law and what will have to wait another year in the handful of weeks the General Assembly has left, but what I know for sure is that your input is critical to the process.